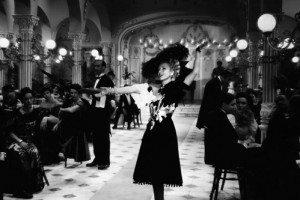 Well Berlin really isn’t such a bad month to be in February after all! The Berlinale doesn’t happen in the dead of winter by accident…you’ve gotta have a few lifts in the bleak zone. That said, we’re enjoying freak weather at the moment – clear blue skies and a sun that is teasing Spring into sight.

I need to triplicate tomorrow evening to take in the Berlin Philharmonic (with Simon Rattle’s first appearance in the year), films that are pouring out the woodwork and now…Tiergarten’s Spanish Embassy is hosting a photography and fashion exhibition celebrating the Spanish couturier Cristóbal Balenciaga and his cinematic costumes.

To coincide with the Berlinale, curator and photographer Pedro Usabiaga is presenting Balenciaga in Film, the first-ever exhibition dedicated to the designer and his costumes for cinema in collaboration with seminal directors like Alfred Hitchcock, Stanley Kramer, Anatole Litvak, Robert Siodmak, Marcel Carné and more. Having whiled away a few hours in the extravagance of the Cristóbal Balenciaga Museoa in Basque Getaria, I can vouch that there is a was a distinctly different glamorous life of the design house that bears little resemblance to the designs of Nicolas Ghesquière or Alexander Wang in the contemporary life of the house.

On show at Berlin’s Spanish Embassy tomorrow will be a collection of over sixty stills from films from 1939 to 1968, narrating the chronicle of a career that included the sartorial deification of monstres sacrées such as Ava Gardner, Elisabeth Taylor, María Félix, Grace Kelly, Romy Schneider, Marlene Dietrich, Brigitte Bardot and Ingrid Bergman, amongst others. Email emb.berlin.cul@maec.es if you wish to attend the opening tomorrow.

Couple it with a couple of cocktails at Das Stue next door.