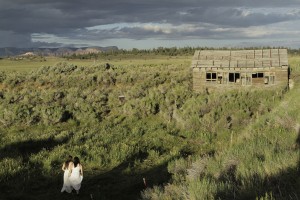 I waited somewhere between a year and my whole life for the Berlin Film Festival – better known as the Berlinale. I can’t say I’ve embraced the ticketing system: super limited sales online and far too many queues. And then more, different queues, systems and visits to kinos across town to buy tickets. But one must embrace the local way of doing things, however taxing.

So after an early rise I secured a fistful of tickets and away I went. No. 1, Butter on the Latch directed by Josephine Decker set the bar at altitude.

Opening with a high-stress scene of a young woman coming to in a garage, surrounded by a handful of dubious S&M ish types. We come to learn that the two main characters know how to party and sleepwalk into a situation or two.

The film is largely set in an exquisite woodland (Mendocino, California) at an intriguingly popular Bulgarian music festival. (Well it is nice to see an alternative to the ‘Daily Mail’ perception of this Balkan nation!) The girls collide over a musician who elevates rather swiftly in estimation from dork to desirable, and as they both begin to vie for each other’s attention, the tension between them is compounded with some serious amounts of lady petrol. They become quietly feudal until they are all but estranged from one another.

The film sinks the audience into exquisite nature and drifts into a world which crosses the line into the dark psyche of a troubled mind, the power of the forest and mystique of Bulgarian spirits. A haunting, beautiful and nebulous film laced with danger.