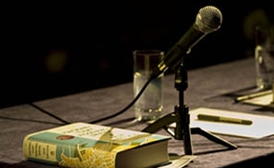 Well does it ease the pain that They’ve always breathed down our necks? No, not really. But if you’d like to come along and learn a little more about the history of being watched and the creative arts,book up for this. We might not have been quite as bad as McCarthy, whose witch-hunts across the Pond persecuted thousands, and we may have given asylum to a number of American lefties. But that doesn’t ever justify snooping.

“Britain’s domestic intelligence agencies kept extensive secret records on many left-wing writers after the First World War. Drawing on recently declassified material from the period 1930 to 1960, James Smith will examine how leading figures in Britain’s literary scene fell under MI5 surveillance, and also the extent to which some writers became willing participants in covert intelligence and propaganda. Writers considered in this talk will be W. H. Auden and his circle, Ewan MacColl and Joan Littlewood, and George Orwell. Dr James Smith is currently Lecturer in English Literature at Durham University. This talk is the theme of his latest book published by Cambridge University Press.”