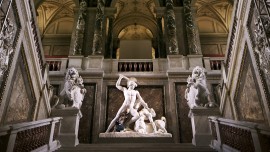 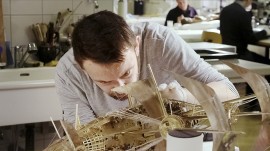 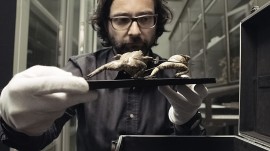 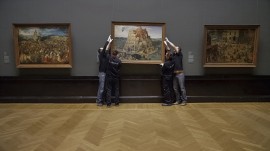 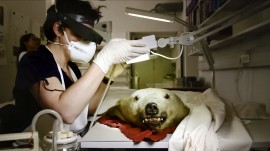 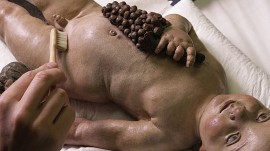 There’s nothing quite as fascinating as a root behind the scenes at a museum. I’ve experienced an Artangel intervention at the V&A’s Victorian hangar for overflow collections near Olympia; the ancient spirit storage in the basement tunnels of London’s Natural History Museum; and the endless acreage of a former bus depot where the NHM’s Zoology Department house their superfluous beasts.

Das Grosse Museum captures the day to day rhythm and flow of Vienna’s grand museum, where people are dwarfed by artifacts and architecture, challenged with honoring the past whilst engaging with the present.

An early scene sees a workman march up to an apparently unmarked spot in expanse of parquet and pitch an axe straight into it, marking the beginning of a next wave of major works. A museum’s work is never done.

The struggle against macro financing and micro nature – as young eyes pour over minute insect invasions into old masters, and cherry pickers raise staff into the rafters to monitor moth traps.

We see the sterile operating theatre starkness of the restoration rooms as a man silently curses to ancient automata. Absorb the disappointment and quiet disbelief as an acquisition team miss out on three key pieces at an auction as prices soar. It is a becalming cultural adventure that reminds you how some vocations simply operate at a very different pace and scale.