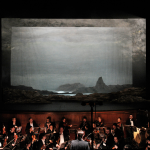 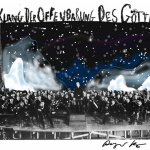 Calling all stressed out Berliners (all three of you) – go and see the next performance of this Icelandic dream that is going to float back into town on the fourth of April.

Given the roll call of collaborators, this is one round table – however creative – that I think I’d happily pass by: created by performance artist Ragnar Kjartansson, compositions by Kjartan Sveinsson, performed by the German Film Orchestra Babelsberg and the Filmchor Berlin, conducted by David Thór Jónsson. Developed in collaboration with the Volksbühne am Rosa-Luxembourg-Platz, Reykjavik City Theatre, the Unterstützung der Luhring Augustine Gallery, New York, i8Gallery, Reykjavik and Botschaft der Republik Island in Berlin.

It might look like a lot of words here, and an endless team, but book up and immerse yourself in fifty minutes focused acutely on very little but the simple beauty of the elements and a pure sound.