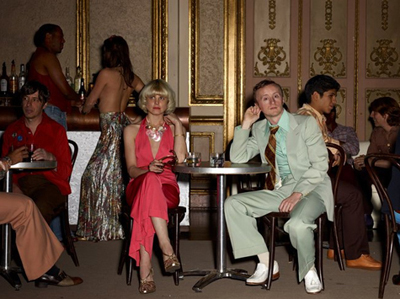 Catch the last week of Stan Douglas’s exhibition Disco Angola at the Miro in Mayfair. I’ve lifted the entire blurb from their site…so, over to Victoria Miro:

“In Disco Angola the artist assumes the persona of a fictional photo-journalist living in the mid 1970s and documenting two very different worlds: the nascent disco underground in New York and the civil war in newly independent Angola. From these culturally and geographically incongruent communities emerges a subtle dialogue that encompasses self-expression, liberation and culture.

The works in Disco Angola are all dated from 1974 or 1975, a pivotal moment in the history of global political economy: the Bretton Woods monetary regime had collapsed, the 1973 oil crisis was just abating, global markets were enduring the worst crash since the great Depression and the rapprochement between the US and the Soviet Union was breaking down. New York was a city on the verge of bankruptcy and the burgeoning disco scene offers Douglas’ protagonist respite from the gritty realities of day-to-day life.

Evolving out of funk and soul, disco made a virtue of glamour and style, reaching out to sections of the populace including the increasingly politicised gay, African-American and Latino communities. One of the first disco hits was Soul Makossa, a 1972 song by Cameroonian saxophonist Manu Dibango, and the African continent as a whole provided an inspiration for much of the music and fashion that defined the movement.  Living in New York, Douglas’ photographer travels back and forth to Angola to report on the civil war that broke out in 1974 following a bloodless coup d’état to end Portuguese rule.

The exhibition presents six works from the series, three based in Angola and three in New York. Each large-scale colour photograph is arranged in a pair that face each other on opposing walls. Douglas researched archival photographs, and meticulously reproduced period costumes and furnishings in his sets. In some images, staged scenes feature precisely choreographed gestures that hint at the relative relationships between characters. In others, props and décor provide clues to the geographic and historic context.

In A Luta Continua, 1974 a woman in striking green t-shirt and bell-bottoms stands in front of a wall painted with the flag and logo of the Movimento Popular de Libertação de Angola (People’s Movement for the Liberation of Angola), one of the key belligerents in the Civil War. In Two Friends, 1975 an uptown couple in contrasting brightly coloured outfits sit in a gold-panelled ballroom, watching the dance floor of one of the New York discotheques gaining popularity in the mid-1970s. Checkpoint, 1975 and Coat Check, 1974 offer formal similarities in their shallow arching compositions: in Checkpoint, 1974 a rope stretches across a road; on each end is bound an odd assembly of objects including a refrigerator; whilst Coat Check, 1975 depicts a selection of fashionable clothes and accessories draped over a huge sectional leather banquette in an unpopulated corner of a nightclub.Capoeira, 1974 shows rebel fighters surrounding two comrades practising capoeira, the martial art form that originally masqued itself as dance and in its earliest form was covertly practised by Angolan slaves in Brazil. It is hung opposite Kung Fu Fighting, 1974 which shows a disco dancer performing dance moves learned from Bruce Lee’s legendary martial arts films. Together the images reveal subtle traces between conflict and dance and an affinity between the recently liberated Angolans and members of the New York gay community.

The early years of the Angolan conflict and the development of New York’s disco scene are linked not only by an historic time frame but also by the introduction of outside elements that transformed the respective environments. Disco, an initially underground music scene, was rapidly co-opted by commercial interests that brought the scene into the mainstream, alienating many of its early adherents. In Angola the agendas of foreign governments, expressed indirectly through covert support of the warring factors, tragically prolonged the resolution of the Civil War by over three decades.

Throughout his career, Douglas has examined and analysed how the visual imagery of popular culture and documentary functions to reveal social and political truths about particular places and historic moments. He has mined the history of narrative film and documentary photography, using and reinterpreting tropes from these genres to startling visual and conceptual effect.

The photographs in the series combine the look of photojournalism with careful staging and composition. By re-imagining scenes from particular historical moments, Douglas invites the viewer to challenge assumptions about the veracity of the photographic image, and particularly to call into question documentary’s relationship to objective truth.”