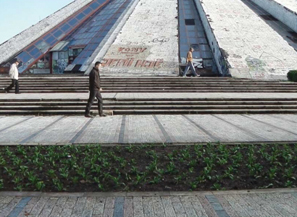 And another trip West for the Frontline’s foray into Albania? I am awaiting the tourism gold rush that hit Croatia and Montenegro to drip south to Albania, I gather from plenty of ex-pat Albanians that it’s equally as good looking.

Edi Rama, the capital’s former hip-hop loving artist-come-mayor and now PM began by galavanizing the city residents to paint striking graphic murals across Tirana as some kind of low-budget facelift. He’s worth checking out alone and may gain some kind of recognition for urban reform in the way that Enrique Peñalosa did in Columbia.

“In the past, the term ‘Here Be Dragons’ was used by cartographers to indicate an unexplored area on a map, in fear of what could lurk there. In his new essay film, Mark Cousins goes on an explorative journey through Albania, interweaving views of the capital Tirana and its inhabitants with old film clips, painting a picture of the political and cultural landscape. Through inescapable architectural structures Cousins learns about Albania’s past. He discovers that the movie prints in the national film archive are decaying and begins to ask bigger questions about history and memory. Perhaps a country whose 20th Century was so traumatic, dominated by authoritarian ruler Enver Hoxha, should allow its film heritage to fade away? With his distinctive imagination and sense of humour, Cousins has created a rich and textured piece of work. He takes us on a poetic and inspiring personal journey that opens new horizons that go beyond the Albanian story.”

The screening will be followed by a Q&A with director Mark Cousins and producer Don Boyd.