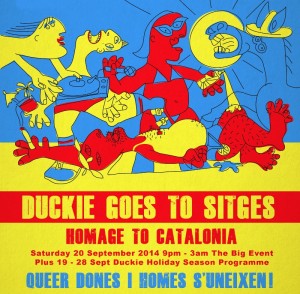 “Culture vulture elle-gee-bee-tea’s – ünt their metro-hetero friends and fans – are invited on a soujourn to this charming Spanish seaside village. Choose a package for 3 nights, 6 nights or 9 nights. Stay at the Duckie hotel or sort your own accommodation and just come to the dos. Pack your budgie smugglers, hair gel and a copy of George Orwell’s ‘Homage to Catalonia’ and for gawds sake Georgina get them lesbians and gay men mixing together. Sun yourself all day and dance all night,with performance sideshows, top tapas,beers, queers, tears for fears, a clash of London and Catalan culture and the brilliant Santa Tecla festival. Sun in September is guaranteed and it’s probably the nicest, queerest, most romantic big village in Europe. We are hoping that about 400 Londoners will come on holiday with Duckie in our first excursion … but that is up to you.”

– 40 minutes in a train or taxi from Barcelona Airport.
– Booking opens for events and hotels in March.Don’t know Duckie? Here’s a pretty good demographic breakdown for you!

“Fuckinell. Radical lesbians. English Rugby Team supporters in all the gear, loads of trannys, straight blokes onstage with their tops off, a hostess standing for Parliament, me and Jelly playing the March Violets and Y Viva Espana and Big Pimpin’ and dusty old chart records which don’t and aren’t ever going to quite fit together, a Jewish bloke doing Sex & The City onstage (I’ve never seen it. so didn’t really get it) followed by a all-girl dance troupe go-go-ing to furious ’60s rave (I certainly got that), and shots and shots and shots and lager chasers and lager and shots and old friends and new friends and PACKED, packed full of people who I’ll probably never know. We live in a world where, apparently, everything is commodified, market-research-able – WHO IS YOUR MARKET? – but I’d love the brand champions to come up with duckie in one of their brainstorms. it’s a testament to those of us who are human, who aren’t a thing to be second-guessed, targeted, marketed AT. 18 years in, still going, who knows why?”

So pub crawls, swimwear parties, Strictly come Sitges and parties – parties – parties! Tropolis was in Sitges recently and can arm anyone who’s interested with all the best bars, restaurants and hotel tips. You just need to ask.