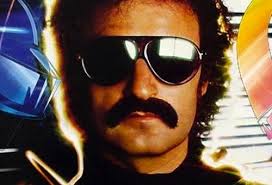 LEAF is a new London-wide festival showcasing the city’s heritage in electronic music. Through a series of talks, technology masterclasses, installations, screenings, parties and performances, LEAF will explore and reclaim the legacy of London as a pioneering figure in the global electronic music movement. Created and curated by Bestival founder and BBC Radio 1 DJ Rob da Bank.

LEAF is bringing the king Giorgio Moroder to town this Friday to talk about his career from Donna Summer to Freddy Mercury, David Bowie and Pat Benatar. Among his hit singles are Donna Summer’s “Hot Stuff” and “I Feel Love”, Irene Cara’s “Flashdance”, David Bowie’s “Putting Out the Fire” and Blondie’s “Call Me” to Daft Punk -before introducing his own version of Fritz Lang’s classic – Metropolis. Restored and rescored by Giorgio himself, the 1984 version of Metropolis has a new, contemporary score. Later on that evening, Giorgio will be playing a headline set at The Oval Space, E2.

Other events across screenings, gigs and talks include Trentemoller, Major Lazer and a keynote talk with New Order. See the whole lined up here.