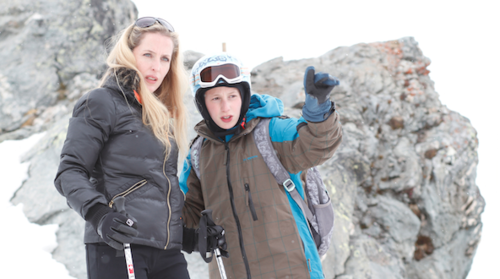 We’ve been privy to some previews of next month’s LFF. What’s in store…

They (LFF) say: An aching, erudite drama about siblings living in an industrial valley at the base of a luxury ski resort in Switzerland.

We say: It’s a challenge to call to mind any Swiss films full stop, let alone films set in ski resorts (unless you want to admit to Chalet Girl?), so we were looking forward to watching Sister on that basis alone. Happily, it’s also a bit of a gem.

Based on the director’s own observations as a child skiing in the Jura mountains, Sister (titled ’Child at the top’ in French) follows 12-year-old Simon, as he travels symbolically and literally up in the cable car from the muddy, snowless industrial valley at the base of the mountain to the gleaming, wealthy resort up top. Lurking around the bars and cafes sporting a conveniently ubiquitous balaclava, we follow Simon as he relieves tourists of their ski equipment and paraphernalia, subsequently selling it on to school mates and a Scottish kitchen worker from one of the mountain-top restaurants (who is similarly on the make).

Simon’s precocious work ethic appears to derive from his provider status – for both himself and his older sister of the film’s title (Lea Seydoux). They depend on the money and packed lunches he brings down from the mountains, and supports her errant lifestyle of dossing and drinking binges.

The contrast between the grimy valley and the gleaming ski-resort atop creates a modern ’Upstairs Downstairs’ divide, with Gillian Anderson in a small cameo role as a wealthy English tourist who befriends Simon and dangles a much desired mother figure before him.

With a few revelations along the way as Simon tries to carve his place in the world, Sister is a disciplined, well thought out and beautifully shot piece of film making.