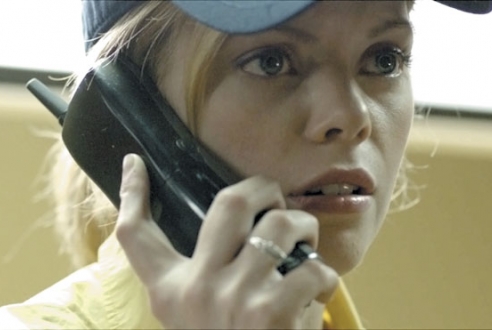 They say: One of the most talked about films of the year; bold and inventive filmmaking destined to leave a searing impression on its audience.
We say: Not arf. At the screening in Leicester Square, the level of discomfort and disbelief quickly started to grow in the audience. Clearly this became too much for some, and a trickle of walkouts grew to a steady stream, some vocally imploring others to leave or loudly declaring it to be ‘shit‘.
This was an interesting reaction, and would have been understandable had we not been informed – in massive letters – at the start of the film that it was based on true events. Were it not, you would have been quite justified in questioning the writer and director for making such a hard to believe and exploitative film. In this case, truth does seem stranger than fiction.
Based on a number of prank calls to fast food outlets in the US around ten years ago, a bogus ‘police officer’ phones on a busy night at the restaurant. He informs the manager that a young staff member, Becky, has been accused of stealing money from a customer’s purse. What follows is like something from one of Stanley Milgram’s psychology experiments as to how far people will go in obeying supposed authority figures.
Restrict your urge to shout and throw things at the screen at the apparent gullibility and stupidity of the victims. Whilst not offering any explanation for the characters’ behaviour and ending rather too abruptly, Compliance reveals a fascinating side to human nature that we perhaps would rather not admit to.