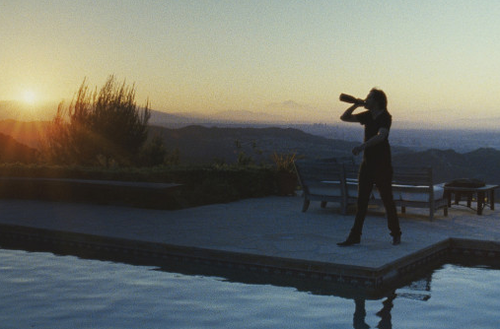 They say: An LA love affair starts between a couple who love booze as much as they might love each other.

We say: Yup, that’s about it! Brits can be a bit puzzled by the lure of LA: we ‘get’ San Francisco no problem, but the huge, impersonal sprawl of its bigger neighbour is disorientating. In this woozily shot feature, the city is depicted as one endless strip of bars with a hard-partying population and where one day blurs into the next.

Divorcee and father Zach lives a life measured out with no strings hook-ups from a list of girls he has lined up, just a phone call away. Seemingly loaded (though we don’t know why or how), with a luxury apartment and no apparent need to work, Zach is free to live life as a semi-functioning alcoholic; his happy-go-lucky best friend Dan (Jack Busey, son of Gary) handily runs a bar. When he meets Rebecca, he finds not just another hard-drinking buddy but a potential soul mate too.

The unromantic couple’s first ‘date’ is a failed attempt to visit a Hieronymus Bosch exhibition, ending up getting wasted in a nearby bar instead. The rest of the film is a haze of booze, fights, drugs, parties and blackouts punctured by the occasional lucid, sober moment. Zach still manages to go jogging with his mate every few days and receives the occasional visit from his parents, but misses a day out with his son due to a binge the night before.

Unlike his other conquests, Rebecca won’t put out and sleep with Zach, however out of it they are. This only serves to increase his ardour as he tries to woo her with trips to New York and their quixotic attempt to visit the Bosch exhibition. Will she eventually soften to his advances?

Rom-com fans won’t like the lack of traditional ‘rom’ and Zach is a pretty selfish character, but there is a black humour here. You may suffer a phantom hangover yourself and feel in need of a stiff glass of water by the end of it.