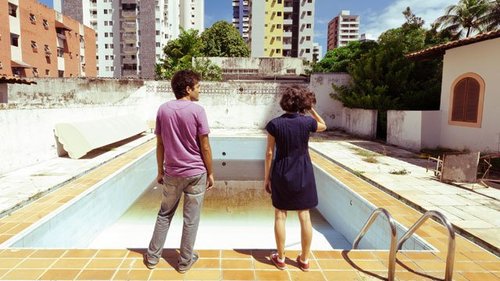 They say: A tense, bold and fiercely compelling portrait of urban life in modern-day Brazil.
We say: Filmed in coastal Recife – Brazil’s 5th largest city – this is both a tale of modern Brazil and colonial hangovers. Set around a middle-class residential street, this is Brazil’s version of a gated community, which itself is under threat from the creeping high rises reflecting the rapid growth of the Brazilian economy.
The camerawork serves to emphasis the socially remote nature of the street’s architecture: window grilles, yards, passageways, locked front gates. Even the interiors have a certain incarceration ambience. The residents seem to be trapped in their own homes with a creeping sense of paranoia seeping in from the world outside.
A bored housewife is troubled by a neighbour’s dog, but instead of going around to negotiate, she tosses drugged meat over the wall. She hardly seems to leave the house, getting her kicks from pot procured from a local delivery guy and sitting on her pulsating washing machine.
There is no central protagonist; we are introduced to the street’s residents gradually, several of whom are extended family of the main property owning patriarch, who earned his fortune on sugar plantations. We get to see the ruins of this when the family leave town for the weekend. Only he seems to feel safe to leave the street for a swim in the shark infested sea, hinting at some Godfather-like power he exerts over the locals.
Indeed, one of the strong themes of the film is the master/servant relationship that, as the film implies, still reigns strong in the modern and now wealthy Brazil – it is surprising to note a new build apartment that has prescribed quarters for a maid.