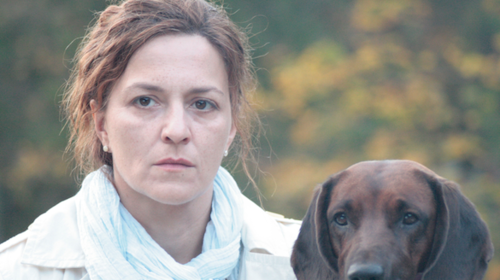 They say: Martina Gedeck stars in a mesmerising Austrian drama about a woman trapped in the Alps, confronting the great outdoors and her own inner humanity.

We say: Not a million miles away from ‘Sister’, but light years away in terms of tone, The Wall is a rather austere version of the bestselling novel by Marlen Haushofer. Inscrutable Frau becomes inexplicably trapped by an invisible force field in an Austrian alpine setting.

Narrated in a Robinson Crusoe-style by the lone character played by actress Martina Gedeck (The Lives of Others, The Baader Meinhoff Complex), Frau has to adapt and survive to her new circumstances with only a few animals and a dog, Luchs for company – with seemingly no hope of rescue or escape. Try to ignore the fact that Luch translates as ‘Lynx’, just like the nation’s favourite magnetic body spray. Its always a distraction having a well known brand pop up at an incongruous filmic moment.

Sci-fi fans may be frustrated with the film’s lack of concrete answers or the desire of the central character to breach The Wall. Indeed, as the film progresses the presence of The Wall becomes less critical evolving into a meditation on the human condition, isolation and man’s relationship with the world around him.

Apparently there is a subtext alluding to women’s emancipation, but this is less subtle and more imperceptible in the film – perhaps a stronger narrative in the novel? But this is an intriguing film, whether you see Frau’s fate as a personal paradise, or never ending nightmare.