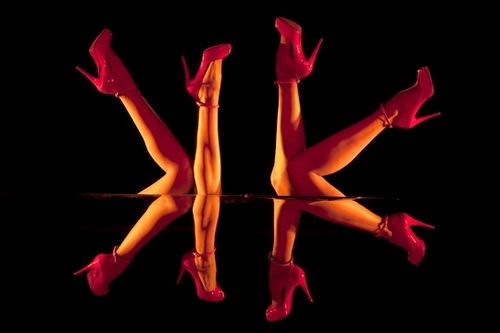 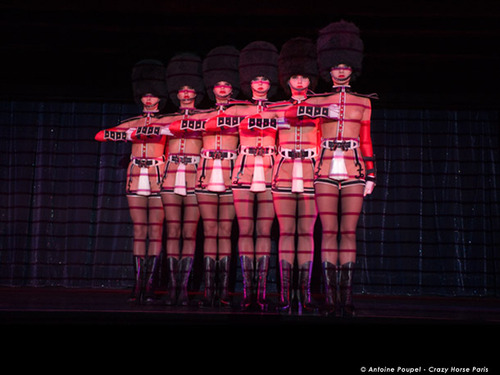 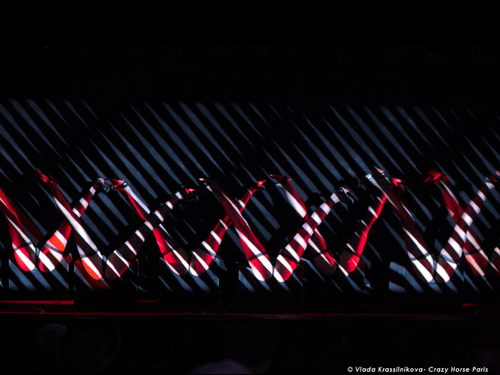 ...whilst the world goes a little crazy over horses popping up in all the wrong places, Marion brings us up-to-date on the original Crazy Horse in Paris…

I just went to the Crazy Horse for the 4th time in my life and was still glued to my chair. I like it because it’s not a cabaret and it’s not about stripping. It’s about raw sensuality and suggestive eroticism beautifully put together in several tableaux vivants, celebrating the female body. The audience is mainly feminine, and my guess is that the new burlesque buzz might have something to do with it.  But in this dark basement room it feels ok to simply sit as a boob watcher, gently sipping a glass of champagne instead of having to scream and clap each time a lady takes off her glove. Such ways have been customary since 1951 when Alain Bernardin created this unique concept. American burlesque strippers found it very confusing back then: the audience was Paris’ crème de la crème and these people only clap at the end of the performance.

A 100% Frenchy show, “Désir” opened to audiences in September 2009. It was directed by choreographer Philippe Decouflé, while Dita von Teese’s favourite photographer Ali Mahdavi picked up Louboutin shoes, Fifi Chachnil costumes and Cadolle corsets, and asked Philippe Katerine to write the last song. Since then, a few acts have been renewed or created like the jaw dropping “Final Fantasy”, directly directed by dancer Psykko Tico. It’s fetishistically acrobatic and undoubtedly gives the show an additional feminine touch.

Apart from the spectacular bodies of the dancers, videos and lighting effects are sometime so overwhelming that it is hard to determine where skin ends and the colour reflections begin, almost enough to make you queasy. The more fragmented and suggestive, the more titillating the body is. You will want the sublime acts “Upside Down”, designed to offer the viewer a gaze on a kaleidoscope of legs, and “Legmania”, a display of endless legs, to never end. These tableaux are indeed the highlight of the show, as the tension slowly decreases after a rather annoying shadowgraph act by Philippe Beau (yuk – a man..). I preferred the Ukrainian twin brothers tap dance act (it changes randomly). A little cliché unfortunately comes on and off, but tourists are sure to be pleased. Anyhow, top hat to the dancers, who really can tease the audience with a killer look à la Bacall, a million miles away from the mechanical dancers in your high street strip joints.