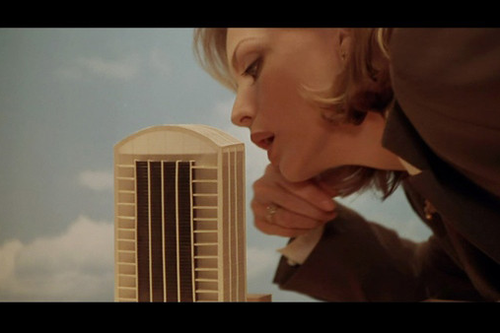 The ever reliable Architecture Foundation screening programme at the Barbican features Architect Gabu Heindl and film-theorist Drehli Robnik, present their ongoing research project, mapping the appearance and use of architectural models across narrative cinema.

“An ever-growing collage-film constructed of a chronological sequence of clips from over 160 films (from The Fountainhead to Die Hard, Alain Resnais to Tim Burton, comedy to sci-fi), Mock Ups in Close Up takes us on a historical journey through architecture’s filmic caricature, by charting the use of the model as an unsung, silent supporting character.

Mock-Ups in Close-Up is a collection of excerpts from an increasing number of narrative films that feature architectural models. In chronological order (from 1919 to 2012), the two-hour long video includes classics as well as recent American comedies and more obscure material. Some of the models figure quite prominently in the films, others appear more randomly. Without using narration, the compilation attempts to push the inclusion of all mock-ups to the extreme – until traction occurs, or until history (including that of architecture and its applications) again becomes relevant through the archives of randomness.”

Tickets £10.50, more information and yet more info about the film.