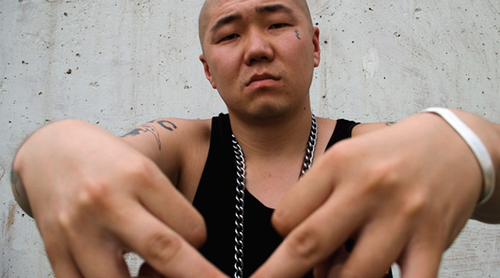 There are flickers of ‘wahh I need to be in London’ from time to time. I’m still on every mailing list known to man, reminding me of what I am ‘missing’ on a daily basis. Berlin is great (I have done next to nothing on writing up good spots – it’s coming). Lack of lingo is locking me out of all the good stuff so I’ll have to work on that ja.

Here is a morsel of something I’d break my neck to get to:

Mongolian Bling is a fresh take on the power of hip hop and a surprisingly candid portrait of a rarely seen contemporary culture – still coming to terms with the1990 revolution that caused the fall of communism and gave a voice to the country’s youth.

In this ancient culture with a rich and turbulent history, the modern beats and rhymes of the street are breaking through and forging a new identity.

Told through the passion of young rappers and the wisdom of traditional musicians, Mongolian Bling takes us from the bustling city streets to the snow-capped “hoods” – following the nation’s rap stars as they “keep it real” with just a bit of bling.

In the capital, Ulaanbaatar, it’s a thriving music scene. But not everybody is happy. As his country rapidly develops, Bayarmagnai – one of Mongolia’s last Epic Singers (songs of good harvests and happiness, usually sung in the heart of winter) – struggles to keep the art form he loves, alive. And the ancient tradition of “throat singing” is also losing fans to the western hip hop beat.

Despite this, Bayirmagnei supports the new musicians: like Gee, a young rapper from the impoverished Ger District; Quiza, one of the country’s most popular rappers, famous for incorporating traditional instruments into his songs; and Gennie, an up and coming female artist intent on breaking down social and political boundaries.

Mongolian Bling is the new hip hop revolution. It’s political, it’s powerful and despite the elders’ objections, it might just salvage their country’s young democracy and keep on track the 1990 reforms that saw the birth of modern Mongolia.

The director will be present for a Q&A after the screening.