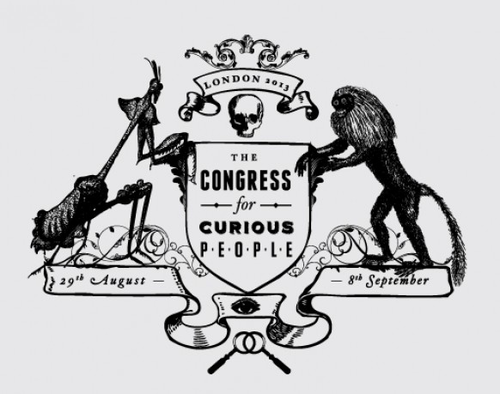 The Congress for Curious People – an offshoot of the Coney Island gathering. Kicking off this Friday. For anyone who prefers life tinged a touch dark, this is for you.

It kicks off on Friday with Spectacular Pathologies at Barts Pathology Museum. On Saturday the whole set up debunks north to Blackpool, playing homage to Coney Island. Over the course of the week you’ll be sent on a true trip via characters such as occultist Aleister Crowley, lectures in C19th seance-based entertainment, esoteric photography and anthropomorphic taxidermy.

The ‘congress’ concludes on 7th – 8th September with ‘Reclaiming Spectacle: a two-day symposium’ – a bargain £20 for both days. “Generally, the word spectacle refers to an event that is memorable for the appearance it creates. In nineteenth- and twentieth-century scholarship, spectacle has been frequently described as simultaneously enticing, deceptive and superficial, but above all as the domination of mass media, consumption and surveillance, which reduces citizens to spectators by political neutralisation. From this elitist view the audiences for spectacles have been described as passive consumers while the agency of those creating content is rarely addressed. We want to exactly challenge the very opposition between viewing (or writing about) and acting. How one can actively translate and interpret scientific spectacles and how can the boundaries between looking and doing be blurred: What can we learn from an encounter with performers, objects and spaces that create spectacles? Can counter-spaces and interventionist critiques be created?”

The symposium will feature life affirming subject matter such as the history of fireworks, performing fleas, Tessa Farmer’s uncanny skeletal fairies, The Blob, Tarantism – Possession and Exorcism in Southern Italy…