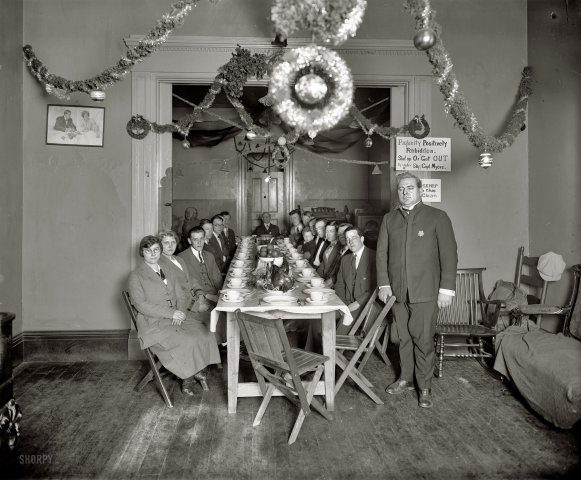 In need of some last minute inspiration? Well firstly, try and avoid Black Friday like the plague. Click through to our FB page to see all the related images.

Check out Brunswick House – great British food in an architectural salvage setting. It might be Vauxhall but you’ll have no problem with finding a late night spot to bowl into afterwards – just don’t forget the leather. The eternal favourite after-dark haunt is the Royal Victoria Tavern – it delivers every time.

Perhaps try Baltic on Blackfriar’s Road – up in the eaves they have a private room that can accommodate plenty. With vodka pretty much on tap its best to hole up an’ away from any other diners and let rip.

Brunswick House and Baltic are both within reach of Simon Drake’s House of Magic, a seriously under-the-radar basement theatre in Kennington. They have nights throughout December for 2-50 people. Simon has performed with Kate Bush and taught Oliver Reed a few sleight of hand tricks for his role in Castaway. Now that must’ve been a challenge.

There’s nothing British about St Moritz – welcome to the Alps! Perennially popular, this is an authentic 70s gem replete with bubbling fondues, gingham curtains and all kinds of useful agricultural artifacts hung all over their rustic walls. You never know when you might need an axe in a restaurant.

The Gay Hussar has just changed hands so this Soho stalwart is likely to undergo some change in the near future. Catch it before it introduces sharing plates and a no reservations policy.

The smart and spacious Newman Street Tavern swallows people up, but even when packed they never drop a ball on service or food.

But Christmas should have a benevolent spirit about it so why not try the Escoffier or Vincent Rooms at Westminster College near Victoria? Top notch food at very reasonable prices cooked and served by students destined for the capital’s top restaurants.

Or go a little further afield to High Down Prison in Sutton (45 minutes direct train from Victoria). The Clink Restaurant is smart enough, and has a good track record of placing ex-offenders into hospitality jobs. Word has it that they’re opening in Brixton Prison early next year.

Perhaps try What’s My Wine at the deeply atmospheric Wilton’s Music Hall on December 11th. A Call My Bluff booze competition with plenty of grub thrown in to keep the wolves from the door.

If you’re thinking about some kind of staff bonding event that doesn’t involve late-night fumbles in the stationery cupboard, then Milk & Honey, Skylon, Off Broadway, Christopher’s Grill and 69 Colebrook Row all do cocktail classes.

Or to hell with dinner and drinks, go and see Fuerzabruta at the Roundhouse instead. Chances are someone in the group will have seen it but they can always wait in the ‘glamorous’ Marathon Bar opposite.

If you just want to let your hair down and let rip – what about the Miniscule of Sound? Despite an attempt by the real MoS to lay claim to their brand, they’re still soldiering on with their flat pack rave: a tent for circa 10 people, decks, lasers, smoke machine, lights, and glitter ball. Everything you need to reconstruct your favourite club of all time.