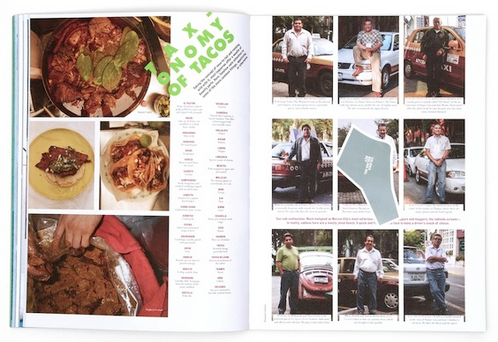 Protein will be hosting the official UK launch of Swallow’s Mexico City Issue at 18 Hewett Street in EC2 next month.

“Swallow is the anti-foodie food magazine founded in 2009 by New York-based Creative Director James Casey, a palate-pleasing respite from gastronomic faddism. The new issue zeroes in on one of the world’s most vibrant and exciting metropolises: Mexico City. While various magazines have recently focused on the city’s trendiness, Swallow’s excavation of D.F. (as it’s referred to by chilangos, or defeños, or locals) stands as the capital’s most eclectic, electric, surprising and exciting portrait yet. For the opening, James Casey will take us on a gastronomic adventure with home-cooked dishes taken from recipes in the magazine, served up in the gallery. Cazadores Tequila will be served throughout the evening.

Placed at random throughout the magazine are 20 scratch-and-sniff stickers, each impregnated with the unique aroma of one of the the city’s many colonias, or neighborhoods. The scents were captured by noted smell researcher, artist, and Harvard fellow Sissel Tolaas using state-of-the-art gas chromatograph technology, and printed with the technological assistance of International Flavors & Fragrances Inc. In other words, this magazine stinks…”

To get a whiff of Mexico City in person, rsvp for the Private View on Thursday 2nd May rsvp@prote.in