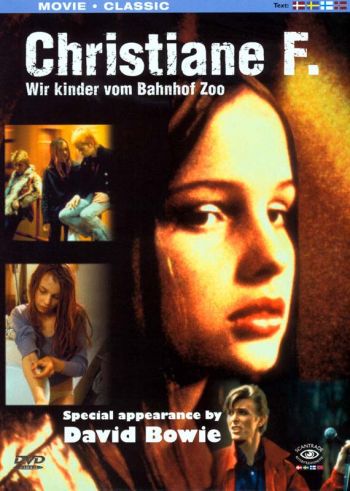 Thank you for your kind introduction Tess, and hallo from me.

If you threw a stone in London at the moment you would probably hit something David Bowie related. So it seems timely to join up the dots of Tess’ departure to Berlin with this cult German flick Christiane F, a 13-year-old’s girl’s journey to the druggy underbelly of the mid 70s walled city (specifically around Bahnhof Zoo Station), including a Bowie concert and soundtrack.

I would have expected the BFI or any of the other rep cinemas to be all over this, cashing in on the fastest selling show in the V&A’s history, but apparently nein.

Track it down while the weather’s still too sheiße to venture much outdoors.

...and a brief note from me, Tess. This is, without a doubt in my Top 3. Whilst girls clamour to get on Sex in the City tours around NYC, I’ve already trawled around Bahnhof Zoo taking in the sites and sights as per the film locations. Whilst everyone wants to hang out East side, I’m fascinated by West Berlin. How very strange to live on an island of Westness, behind the iron curtain…this film was meant to put a strong message out to the kids of W Berlin in the 70s but failed miserably. Christiane had such a look goin on she rocketed to style guru status. Everyone wanted to be her.