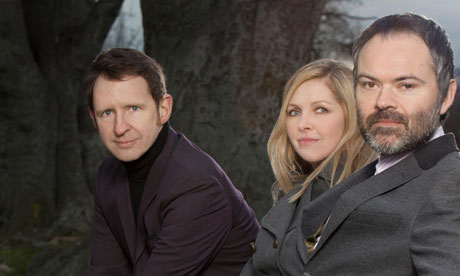 Years ago, Time Out used to run a column ‘My Favourite Londoner’, where  someone in the public eye waxed lyrical over their favourite resident of the capital. If I was ever asked (yeah right), the person I would have chosen would have been Bob Stanley from Saint Etienne.

Apart from being in the band, he’s a bone fide London obsessive, and as well as being artist-in-residence of the Royal Festival Hall, writes articles about the London Pedway, and has also turned his hand to film making, with a string of charming odes to the capital.

There is a substantial element of documentation in their work, such as a short film about London’s disappearing cafes, or a look around the Lower Lea Valley before the Olympic bulldozers moved in (‘What have you done today Mervyn Day?’).

To coincide with the imminent release of a DVD compilation of their films, he is in conversation at Stoke Newington Town Hall this weekend as part of the Literary Festival.

I’ve also seen him randomly around town: at a bus stop in Golders Green, in a pub near Euston Station and at the old Claremont Road football ground watching Hendon FC, the team he supports (he got me interested in them via a short film he made about their mascot, ‘Monty the Lamb’, also on the DVD).

So Bob, you are my favourite Londoner, congratulations!

A London Trilogy: The Films of Saint Etienne, released on DVD July 15th through the BFI