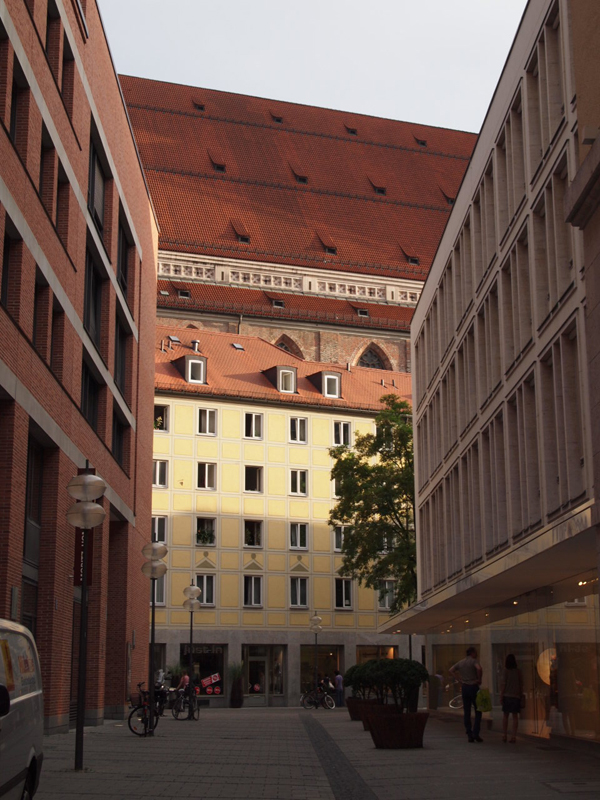 Munich, Germany’s third city and capital of Bavaria. Ranking consistently high on ‘liveability’ indexes – be it Monocle or Mercer, this city is quite the antidote to Berlin. You don’t come here to party all night but to put your feet up and enjoy the good life for a few days. I can see why the city motto graduated from Weltstadt mit Herz (Cosmopolitan city with a heart) to München mag dich” (Munich loves you). At first sight, Munich is one of the less cosmopolitan cities in Europe and takes pride in its local culture. There are many surprises here, you just need to know where to look…

Warm and cosy in the winter, cool and airy in the summer. The lounge, bar, terrace and dining room all converge into one open space, which is commanded by a small fire and roots you in Alpine mode. The hotel is perfectly located for indulging in every possible way – by way of retail at Maxx, or mouth at the nearby Viktualienmarkt. The selective materials and general ambiance give it away that one of the founders at the group Kull & Weinzierl is an architect: they put design high up on the agenda across all their hotels (including the Louis), and restaurants – and it’d be hard not to fall into at least a few whilst you’re in town – but with each property having a unique identity you might never know… 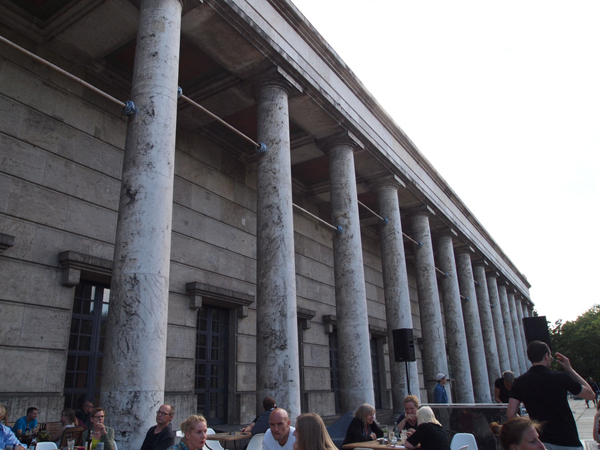 One of the more arresting buildings in the city. The Third Reich’s monumental structure was completed in 1937 as the Haus der Deutschen Kunst (House of German Art), and with the Große Deutsche Kunstausstellung – or Great German art exhibition – which was intended to contrast explicitly with the now notorious condemned modern art exhibited in the concurrent Degenerate art show. One can’t help but acknowledge this building as a lone, positive legacy of the period. We got to enjoy three truly brilliant exhibitions on our visit, before flopping in the equally striking Goldener Bar at the back (see notes below). British architect David Chipperfield has been engaged to work on a major renovation – no doubt after his spectacular work on Berlin’s Neues Museum. 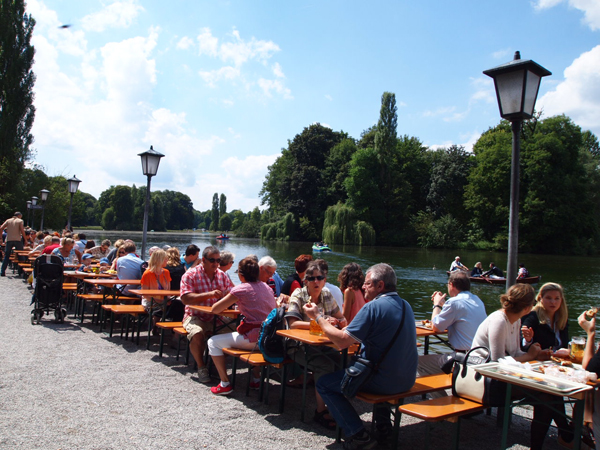 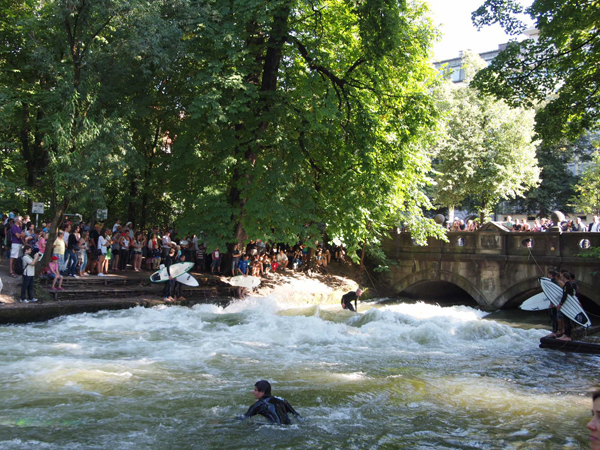 Just behind the Haus der Kunst lies one of the finest and largest public parks in Europe covering nearly 4km2. Deceptively large given its slim entrance, this is where you drift, drink beer, surf and sunbathe starkers. At the mouth of the artificial stream that runs through the Englischer Garten, there is a standing wave produced by the water pumping mechanism and this is where you can marvel at a group of surfers tacking a churn of water right in the city centre. Further down the stream, bathers pile in to drift along with the current – right upto their necks.

Get yourself organised with bikes before you hit the park. You need to cover some ground and get in deep to get to the best biergartens else you’ll be stuck with the crowds at the Chinese Tower. Persevered and you’ll get to Seehaus which is busy as hell but better. 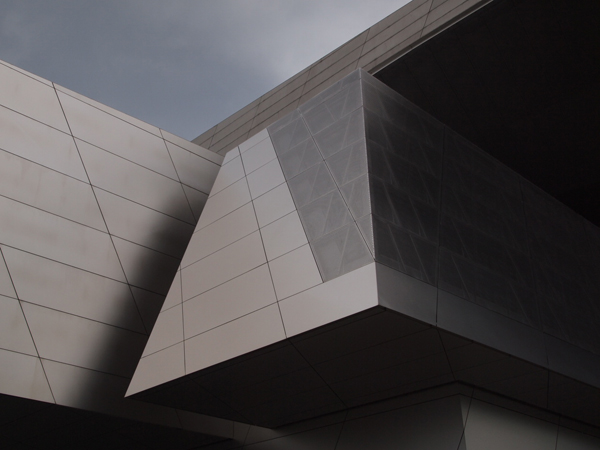 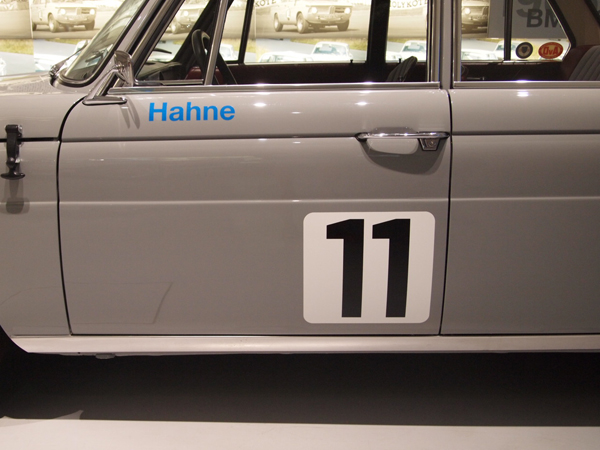 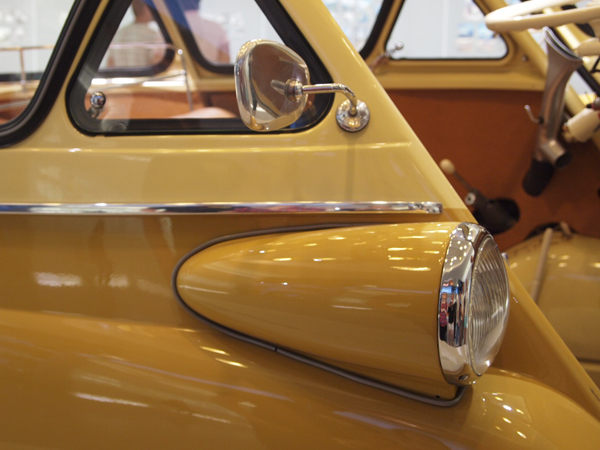 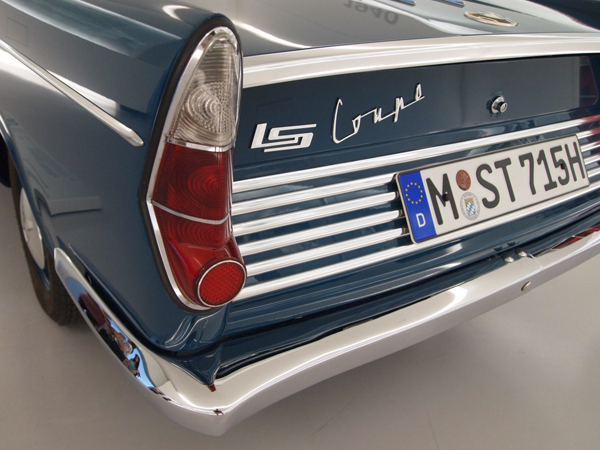 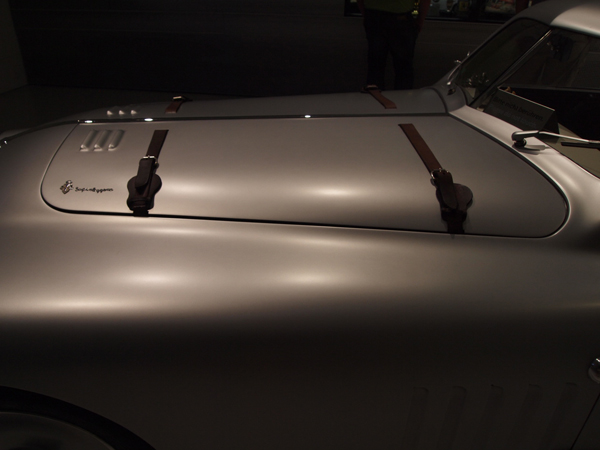 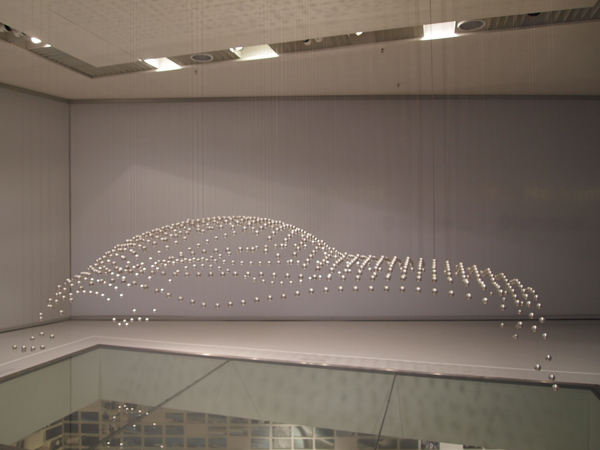 This museum exceeds expectation of one of Germany’s leading brands. Not just the preserve of petro-heads, you’ll find bubble cars from the 50s, racing vehicles from all eras, concept cars, quintessential Filofax-red Exec styles, prototypes, you name it. A really great day out that just makes you fall a little bit in love with BMW – and certainly displaces the rather unfortunate rep that it accrued in 1980s Britain. 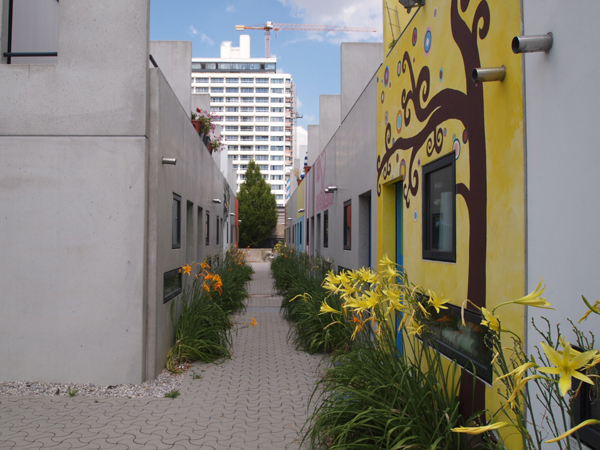 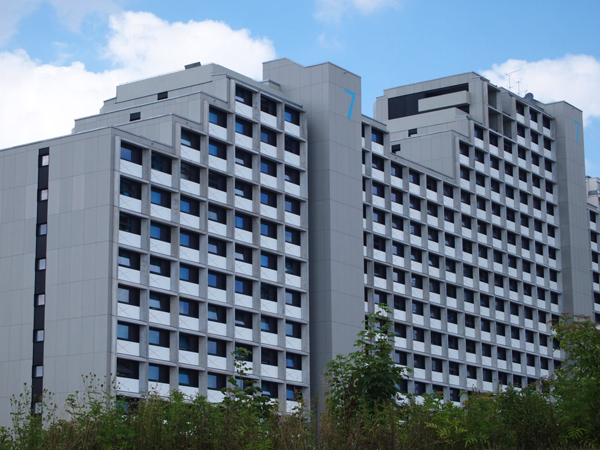 The perfect place to walk off the BMW dazzle. Take in the quintessential and really quite seductive 70s tiered blocks in the area before crossing the bridge into the park itself. This is the site of the ’72 Olympic kidnappings – a particularly messy event in history that was dredged up in Spielberg’s Munich. 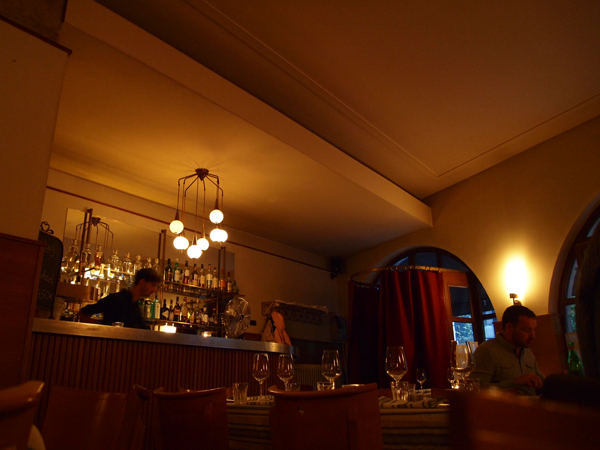 A dark, sultry, laid back bistro catering for all tastes – whether you want beetroot, salmon or venison carpaccio to start this winter.

Bright, lively and a perfect marriage of historic and contemporary architecture. Logs pile up high into a beautifully repetitive vaulted ceiling that would’ve completely foxed any pre-Renaissance painters. Grills and open kitchens break up the otherwise vast space. One of those places that manage to fulfil any brief – frühstück, lunch, sharpener or dinner. Inside or al fresco.

A laid back bar and eatery in the gay quarter. Plonk yourself at a window seat and watch the fun and games going on in the old queens’ bar opposite. You just know where you’ll end up after dinner…

A seriously popular Italian in the shadow of the main church. Go early, reservations can get confused, dishes run out…but once you’ve nailed a seat you’re in for a treat. The disarmingly charming and rather curious proprietor has a cellar to die for, but the only real shock that’ll happen is if you let him choose the wine for you. His idea of ‘good’ is very different to ours… 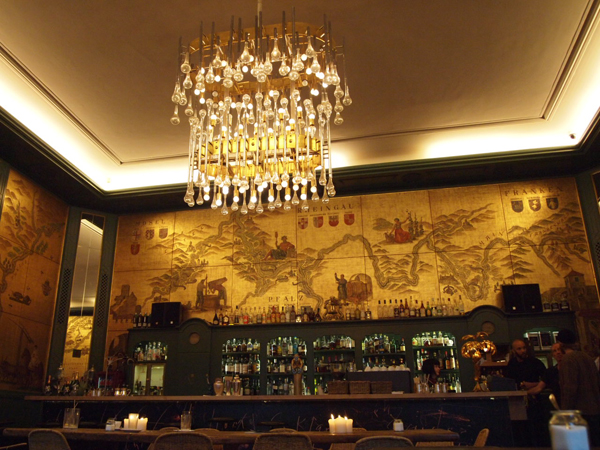 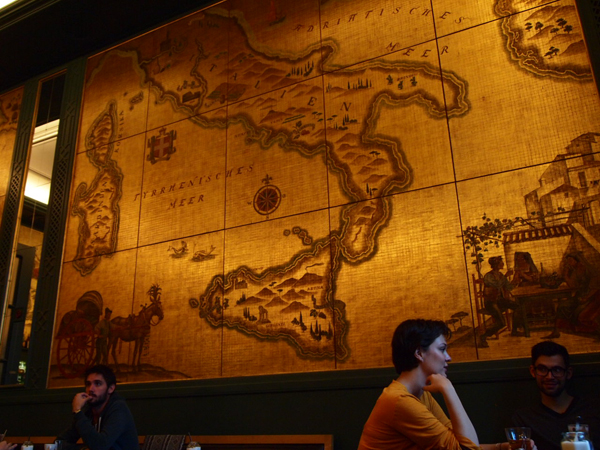 At the back of the Haus der Kunst lies a sumptuous, mosaic lined bar that shimmers with the possibilities of global explorations and trade of the Enlightenment.  The name of the bar is a reference to Karl Heinz Dallinger’s wall paintings from 1937 that were created in the original bar space at the Haus der Kunst on the suggestion of the bar’s architect Ernst Haiger. The origins of the wines and spirits served are shown on maps and landscapes with German wine regions taking centre stage alongside Europe’s wine countries and the British Isles’ whisky and gin, and the Caribbean’s rum and tobacco. The mural exudes worldliness which was an important factor for the National Socialist rulers of the house. In the summer the bar tips out onto the huge terrace overlooking…well…the car park of the Englischer Garten. But there is a wealth of fantastiche people watching and great sounds from the city’s best DJs to occupy you as the sun sets.

Goldene Bar, Prinzregentenstraße 1 – enter through both the gallery and around the back of the building. 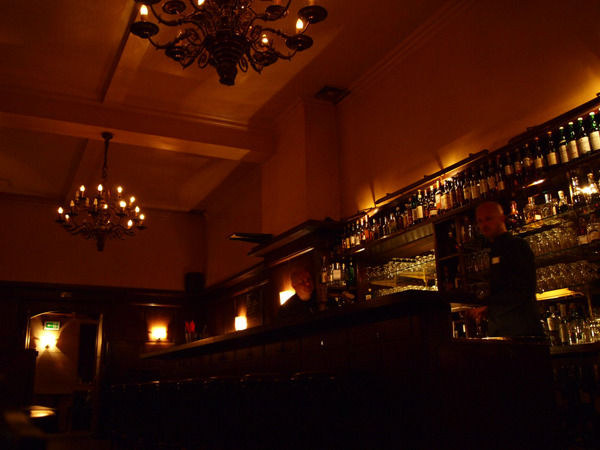 Go late, go dark. This is your nightcap bar. This being Munich it’s less of the dive, and more of the luxe. 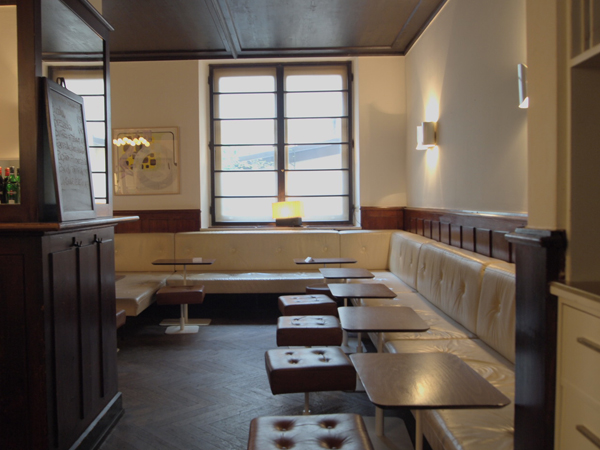 You may hear Münchner’s claiming to feel more latin than Deutsch. Well its certainly only a short hop to Italy, albeit via Austria, but you feel how you feel. So this should be a spiritual home for locals – and this feels authentic. It stops short of going down the Peroni ad route, so there’s no Anita Ekburg in the Trevi on loop, and no Vespa parked up outside. A perfect breakfast or aperitivo spot right opposite the Cortiina Hotel. 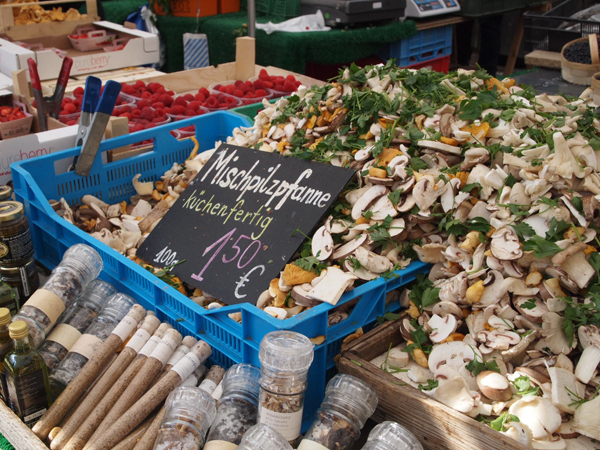 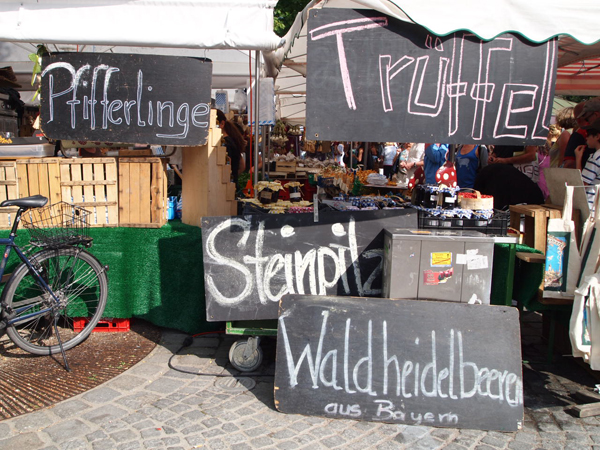 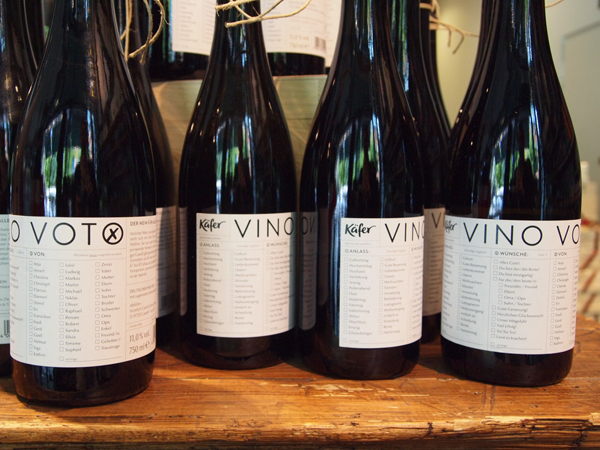 Come hungry. The food hall presents a host of smart eating, drinking and shopping options whilst outside you’ll find over 100 stalls selling boxes of foraged and cultivated goods. Find yourself a hunk of Alpine cheese and bread and prop outside one of the bars to watch the Münchners at work and play. 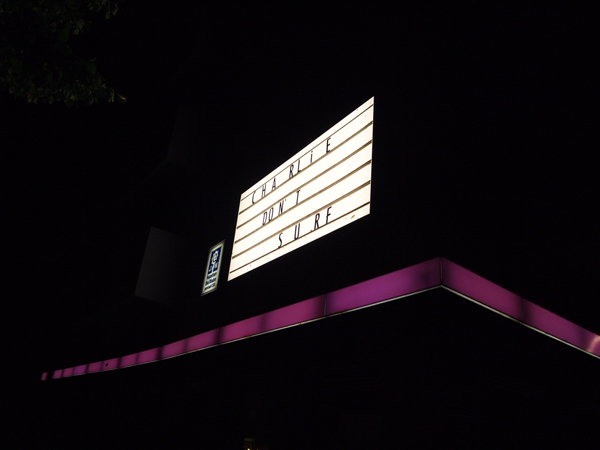 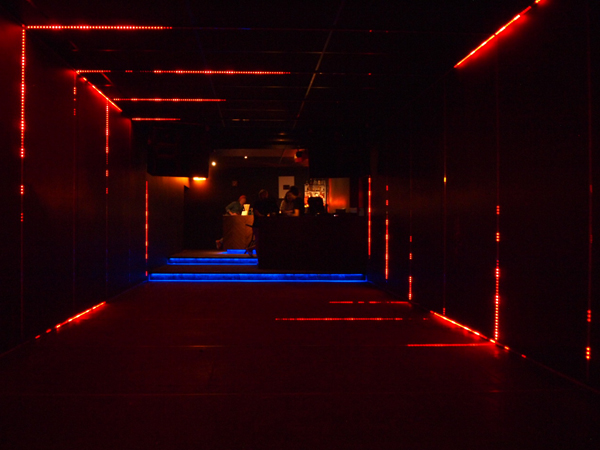 Just to the south of the city centre lies the city’s coolest diminutive club. Seek out the modern Vietnamese restaurant on the corner (which has a distinctly retro Hollywood look to it), navigate your way down into the basement, et voila – a perfectly packaged disco basement that smacks of a set straight out of Xanadu. It might look like a vision of the future from c. 1979 but the music is very much now – techno and electronica. A great spot that does away with all of the clubbing rigmarole that others impose.