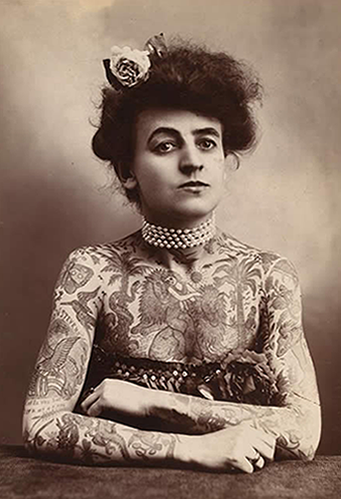 You know when Autumn’s coming, the diary fills up with art+goth. The Little Shop of Horrors in E8 have a pretty good programme lined up. Here’s an edit:

Curious Cafés of the Belle Epoque with Vadim Kosmos

Cabaret de L’Enfer’s malevolent façade threatened to devour all who dared to step within its damnable interior. But how did this most macabre of cafés originate and what went on within? This talk explores Fin de Siecle Paris’ craze for morbid drinking dens including L’Enfer’s less well known, but no less sinister, sister establishments; Le Ciel, Neants & Truands.

Gemma Angel on the History of Human Tattoos
The late nineteenth century saw an explosion in academic interest in the tattoo. Tattoos played a significant role in medico-legal research across a wide range of disciplines, notably forensic medicine, criminology, anthropology and psychiatry. Whilst many scholars collected data on tattooing in the form of drawings and occasionally through photography, tattooed skins where also harvested. These historic collections now reside in a number of museums and archives across Europe. The largest of these collections, consisting of 300 such objects, is currently held in storage at the Science Museum, London.

An off-site visit to the newly rejuvenated St Bartholomew’s Hospital Pathology Museum. Speaker Ebenstein will contextualize these artifacts via a discussion of the history of the medical museum.

Dr Pat Morris – Extreme Taxidermy: Elephants and Humans
Preserving a full-sized elephant represents the ‘Mount Everest’ of taxidermy. It is a challenge not only to the taxidermist’s artistry (in attempting to make an accurate representation of the living animal) but it is also a serious engineering problem to handle such a large and heavy item.

Eleanor Crook on Plastic Surgery of the World Wars

The rifles used in the First World War fired low-velocity bullets that were sufficient to cause great damage, but unlike high-velocity bullets, would not cause the energy waves that result in instant death. As a result many young men survived the war with appalling facial injuries. During the Second World War, Harold Gillies and Archibald McIndoe established a specialised plastic surgery unit at East Grinstead Hospital, becoming known as the Guinea Pig Club – treating injured servicemen and civilians and marking a hugely significant advance in medicine.